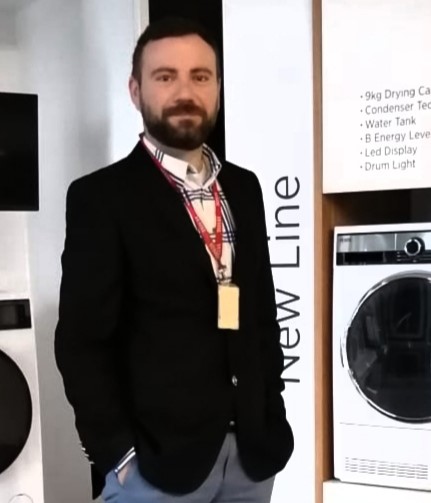 ON VESTEL WHITE GOODS AND ACCESSORIES…

I was born in 1981 in Alsancak, Izmir. After completing my high school education at Atakent Anatolian High School, I completed my undergraduate education at the Department of Economics of 9 Eylül University. I started my business life in the Import and Logistics Department at Vestel White Goods in 2005. I have been working as an Import and Logistics Manager since 2013.

Vestel White Goods Company, which is located in Zorlu Holding and was established in 1997, first started its activities in 1999 with the production of refrigerators in Vestel City, the foundation of which was laid in 1998, and its field of activity is the production of white goods. Vestel White Goods is a leading company in its sector that produces ODM/OEM products as well as the domestic market and exports 80% of its total production.

Vestel City, its production base in Manisa, is one of the largest industrial complexes in Europe, producing in one location. Vestel white goods Vestel city, which has a total of 1.1 million m2 indoor area production facilities for 355.800 fridge, freezer, washing machine, dryer, dishwasher, cooking appliances, air conditioning and water heater manufacturer. The company exports to 157 countries as 7th biggest exporter of Turkey.

Vestel, one of the first companies whose R & departments are accredited as an “R & D Center”, is constantly strengthening its R & D with its emphasis on innovation and technology. With this vision, we have been awarded 325 awards, including the most prestigious awards in Europe, so far. We also have 224 registered patents.

In parallel, depending on the product range and updated, developing technologies, we need the external market as well as the internal market for the supply of materials. As Vestel White Goods, our volume of “intermediate goods import” abroad is approximately 385 million euros in 2020. We manage a total import volume of 8000 containers only in marine operations. In exchange, on the export side, which we carry out through Vestel Trade, this figure is 49,000 containers.

Efforts to facilitate trade in international trade the GATT (General Agreement on Customs Tariffs and Trade) was signed in 1947-1948 and the WTO-led negotiations began in the 2000s, and the Trade Facilitation Agreement entered into force in 2017.

In this process, in 2013 (Official Gazette dated 10.01.2013 and numbered 28524) with the Regulation on the Facilitation of Customs Procedures published by the Ministry of Customs and Trade, the systems switched to the application of the authorized economic operator status, which is an international application. The authorized economic operator status (AEO), which is an international quality symbol, has been implemented.

This document, which adds reputation to companies, provides reputation and advantages not only in Turkish customs, but also in trade with companies with this document worldwide with the principle of mutual recognition.

We also completed our necessary infrastructure works and added the YYS certificate to our brand value in March 2016.

As Vestel White Goods, we manage our input logistics in the Supply Chain with the “Just in time” system, which is our basic principle. We feel the advantages of our YYS certificate at every point during import process where we compete with time for each intermediate input. The YYS certificate, which allows trade facilitation, first of all, provides for coordination and reduction of formalities between the subject of trade within the country, private sector and government agencies, as well as between customs abroad as a procedure.  We have the opportunity to process at customs green lines, which is a certificate of cooperation between the Customs Administration and the Private Sector, and in this regard, we receive VIP services at customs, subject to less document control and inspection. The fact that the time between the registration of the declaration and the shipment of the material delivery to several hours, first of all, makes a great contribution to our “just in time” system in our Supply Chain.

On the other hand, making declaration with the missing document, customs regulations, right to receive goods without waiting for the result of the analysis, lump sum collateral, right to be able to complete import without falling into the customs risk criteria in the system risk criteria without a declaration of origin (especially for loads accompanied by ATR EU) on imports, right to be able to complete import without giving declaration and  other documents to customs declaration and with other advantages, our company has great benefits in terms of cost savings and gaining time for customs formalities.

We have created an YYS-oriented structure within our company with the awareness of fulfilling the obligations of having this value by acting with a more competitive vision in the national and international markets by using the increase in brand value and other advantages provided by YYS to us. As Vestel White Goods, our goal is to be the company that best implements the obligations of the YYS and makes the most rational use of its advantages.